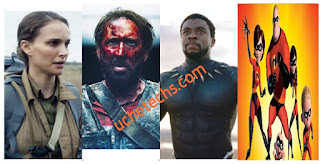 The trailers and official teaser trailers have been released, see all the information about these films and watch its official trailers. Enjoy

The story of a 1983 man who embarks on a mission of revenge against the religious cult that murdered his wife.


Marvel again features a stand-alone movie for a superhero - black panther, it will definitely be one of the most awaited movies this year - 2018


Alex Garland (Ex Machina) wrote and directed this sci-fi-horror film about a biologist who ventures into an environmental disaster area to search for her missing husband. An action movie, can't definitely be among the best.


Ava DuVernay (Selma) takes the reigns of this big-budget Disney fantasy film, an adaptation of Madeleine L’Engle’s book about a young girl, her brother, and her friend’s odyssey into space to find her father courtesy of three mystical figures. A wonderful fantasy movie that will catch your attention.


Nine years after Fantastic Mr. Fox, Wes Anderson returns to stop-motion animation with this saga about a boy searching for his missing dog on a quarantined island populated by canines. A funny animated movie which could be one of the year’s most charming offerings.


A young kid (Tye Sheridan) goes on a virtual reality treasure hunt—and which will no doubt be overflowing with shout-outs to your favorite fictional properties and characters.

✔YOU WERE NEVER REALLY HERE (APRIL 6)


A drama movie which focuses on true life story. Will be very interesting for movie lovers.

Still, one of the best movie to watch out this year, very interesting and funny. Deadpool!

Still one of the best movies of 2017, nothing much to say. It's a funny animation and interesting film. The original director "Brad Bird" is still on board, one of the long-anticipated movie to keep watch.
PublisherWisdom UchePosted atMonday, January 01, 2018 8 comments
Labels#movies, #Top list