Share
Theses smartphones Sony Xperia XA1, XA1 Plus and XA1 Ultra are now receiving Android 8.0 Oreo update. This is not the first Oreo Update from Sony. Last year October, there was a similar update as well. 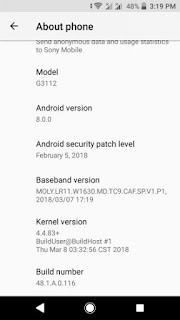 The update is currently rolling out in a large number of countries. While the oreo update size around 885MB and includes the February Android Security Patch.