Share
Xiaomi Redmi S2 to be Launched on May 10 in China officially. This is another huge Ram device from Xiaomi which features 4GB Ram. 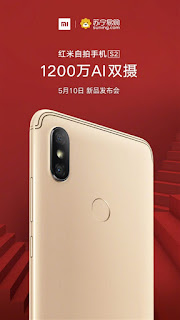 Xiaomi has released an official teaser on Weibo and this shows that the smartphone will feature a vertical dual-camera setup at the back and it's quite similar to that of the latest Xiaomi phones with flat backs and finger print sensor.

The Android device also comes with 5.99-inch HD resolution. No deatils on the device Android device operating system. Here are the key specifications and images of Xiaomi Redmi S2 smartphone.