Share
HTC has finally made a comment about the trending Android 9.0 pie update on various devices. Four of their phones to have the latest Android 9.0. 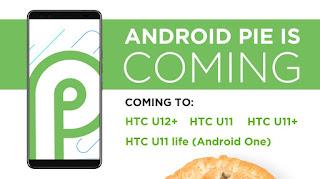 HTC officially announced this update will be rolling out on their twitter page. They said HTC U12+, U11+, U11, and U11 life Phones will get the Android one delicious Pie update.


We're pleased as pie to confirm updates to Android Pie for the HTC U12+, U11+, U11, and U11 life (Android One). Timeframes for roll-out will be announced in due course.

We can't wait to know what you think of Google's freshest slice of Android! pic.twitter.com/mPJePFegne
— HTC (@htc) August 10, 2018

Also, we are told that timeframes for roll-out will be announced in due course since there aren't any specific timeframe for the updates. The phones schedule will be published soon.