Share
Xiaomi Mi Mix 3  will be on of the first phones to really launch a smartphone that supports 5G networks. This has been trending since Xiaomi co-founder and president Lin Bin released a teaser about the phone. 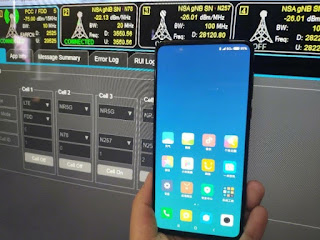 From the picture above, we can see the phone which appears to be in a 5G testing station and it's status bar reading "5G". Looking down, you can see cell 1 to cell 5; from there you can see the new 5G standard - "NR5G" which refers to the 5G New Radio standard, which encompasses the sub-6GHz and mmWave technologies.

This proof shows this isn't going to be just a regular rumor but it is certain they will release a phone that supports 5G network. We still await the Full specs of Xiaomi Mi Mix 3 5G Phone, before then, you can check out Xiaomi Mi Mix 2S Phone Features.

Xiaomi co-founder Bin suggested that the Xiaomi Mi Mix 3 might be launched in late October 2018, so this likely means hat the notch-free device with 5G Internet could be less than two months away.

Meanwhile, here is the photo that was tweeted by Xiaomi's Director of Product Management, saying that the rollout of the phone will be next year.


We've successfully tested 5G data connections on Xiaomi phones, and we can't wait for the official rollout of 5G next year! 🎉🎉