WhatsApp to Soon Allow Group Admins Delete Messages for All

WhatsApp is working on a feature that will allow group admins to delete anyone's sent messages for everyone in their group chat. This new feature will prevent unwanted messages sent by members of a group from being seen if the user refuses to unsend the message by him/herself.

This new feature was first spotted on WABetaInfo, a WhatsApp beta testing website for upcoming features on Android, iOS, and PC. From their report, WhatsApp beta for Android 2.22.17.12 users will be able to test the unsend message for group admins. Just as when you delete a message for a contact on a private chat, when an admin deletes a message, other members will see the text that a message was removed by an admin. 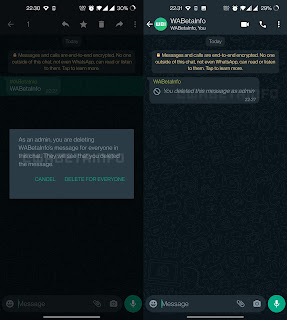 Another upcoming feature WhatsApp is working on for Android is localized in-app announcements for new features in a form of the bot. Currently, WhatsApp sometimes uses status to make special announcements regarding their app - however, they will now do so in a form of a chatbot for all users.

The in-app announcements will also include tips and tricks for users to improve their experience within the application. Meta could also make use of this to share major information about their company and related services. WABetainfo also said users will be able to block the bot feature if they are not interested in getting such updates.

So both the delete messages for group members and WhatsApp in-app announcement feature are unavailable. Kindly leave comments below if you want to share your thoughts.