Xiaomi 13 and Xiaomi 13 Pro have been launched, and now we have a verified overview of the smartphone's specifications and vital details such as the processor, storage options, and camera features. One notable feature is the device's top-end Snapdragon 8 Gen 2 SoC, very important for gaming. Let's check out its full review. 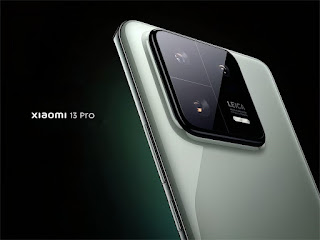 Both devices come in four color options, these are;  Ceramic White, Ceramic Black, Flora Green (Ceramic), and Mountain Blue color options. Starting tomorrow, that is December 14th, the device will go on sale in China.

Furthermore, the RAM is 12GB of LPDDR5X RAM, with 512GB UFS 4.0 of internal memory space. For the camera, the device sports a Leica-branded triple rear camera setup, with the main rear camera sensor being a 50-megapixel 1-inch Sony IMX989 with HyperOIS and f/1.9 aperture.

It also includes a 50-megapixel floating 75mm telephoto sensor that supports OIS and EIS, including a  f/2 aperture and a 50-megapixel wide-angle sensor with a 115-degree view angle and f/2.2 aperture. For the front-facing camera, the Xiaomi 13 Pro comes with a 32-megapixel sensor.

And finally, the Xiaomi 13 Pro packs a 4,820mAh battery that supports 120W wired charging and 50W wireless charging. The weight of the phone is 162.9x74.6x8.38mm, weighing 210 grams. The speaker's support is stereo speakers with Dolby Atmos support and has Hi-Res audio certification. The phone is dust and water resistance. 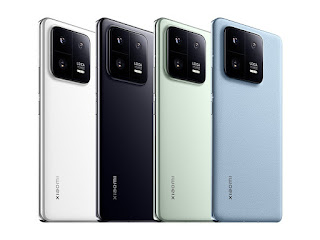 
The device is coupled with up to 12GB of LPDDR5X RAM and has a dedicated VC liquid cooling area of 4,642 square millimeters for better thermal management during gaming.

Xiaomi 13 comes with a 512GB of UFS 4.0 inbuilt storage with the connectivity options and sensors being exactly the same as the Xiaomi 13 Pro. That are an accelerometer, ambient light sensor, ambient color temperature sensor, and so on.
As for the battery, it packs a 4,500mAh battery with support for 67W wired charging and 50W wireless charging. The device measures 152.8x71.5x7.98mm and weighs 189 grams. Featuring the same speaker specs as the Xiaomi 13 Pro.

In other news, the Xiaomi Mini PC with 12th Gen Intel Core i5 CPU, and 16GB RAM was launched alongside this device. It is said to come with Intel Iris Xe graphics (80 UEs) along with ports for external graphics cards and hard drives. Windows 11 is pre-installed, with 16GB of DDR4 RAM while the standard variant includes 512GB of PCIe 4.0 SSD storage.
So these are the full specifications of the Xiaomi 13 Pro, Xiaomi 13. We have reviewed their pricing, color options, camera, software features, and hardware. Let us know what you think about this new flagship Xiaomi device.
PublisherWisdom UchePosted atTuesday, December 13, 2022 Post a Comment
Labels#Latest Phones and Gadgets, #Phone Specs