Share
Samsung has come up with something big this time around and it's a new Samsung galaxy note 8 special edition for the upcoming winter Olympics. The smartphone might not be easy to get or in fact, might not be for sale since it is a limited edition of its flagship device. 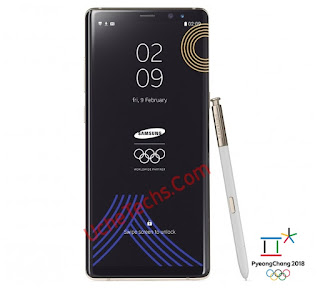 Like i said, the smartphone might not easily come by because it is designed only for the athletes and organizers of the 2018 PyeongChang Olympic Winter Games. The device features an awesome and attractive S Pen and have beautiful combination of white and gold

Samsung tends to sponsor the game so well in other to provide Olympic and Paralympic athletes with an Android phone with high-quality features to ensure that they are well communicated and that users can capture and share their best moments during the event.

Samsung said on their official website the special and limited edition will only have 4,000 units that will be distributed internally. Samsung hasn't said anything about the release of this smartphone officially in any country.

The device has tradition ring and incorporates special themes of  PyeongChang 2018t o decorate the desktop and necessary applications for athletes.

The event is to be held in this city of South Korea will begin next February 9 for almost a month. How do you see the smartphone?
PublisherWisdom UchePosted atThursday, January 18, 2018 Post a Comment
Labels#samsung, #samsung news, #Tech news