Share
Xiaomi  Mi A1 received their first Android 8 Oreo update late December in 2017, but due to the complaints from users, the company has started rolling out a new version of Android 8 Oreo. 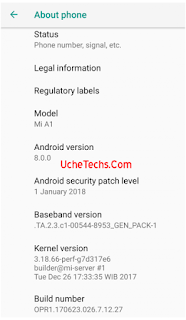 The update comes with the latest January security patch update. The below are some fixed bugs and new features added.

The size of the new Oreo update is 89MB. But for Nougat users, the size is more than 1.1GB. So use strong WI-FI to update to download.