How To Add Touchscreen To Laptop Using AirBar for Windows

Share
How to add Touchscreen to Laptop is what we shall learn today. This Pc trick is very easy and doesn't require much. You can convert an old windows Non-Touchscreen into touch screen laptop easily using AirBar for Windows. 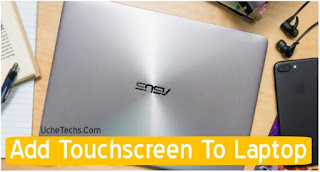 AirBar is the device we will utilize and this pc device can be used to make your computer touch screen for free.

Also, non-touchscreen laptop users can use this hardware to control what is on their computer screen easily. This is actually possible to add touchscreen to laptop and not some unreal tech tricks. The name of the software is AirBar.

How Does AirBar Work?

This awesome Device named as AirBar is a Plug and Play Device which is available for 11.6 inches to 15.6-inch Laptops.

AirBar is a slim module which magnets to the bottom of a PC’s display. So when you have attached it, you will plug it to the USB port in which the sensor will be activated.


Now, the PC will start to emit invisible light to the Non-Touchscreen pc to detect the user's gesture. Now we are getting closing to Adding Touchscreen To Laptop  To make things very easy, use the popular interaction which is tap, zooming, and scrolling, pinching and swiping. This is the best method to Add Touchscreen To Laptop.

AirBar is very easy to use and it is portable and pocket-friendly. Whenever you are in the office it can be used to save time. It can be used in school, traveling. The best features of AirBar is that it detects gloves, paintbrushes or even fingers.

Features Of AirBar For Windows

Like I said earlier, this device works well with gloves, this simply means you don't need to remove your glove and since it emits light, it will easily detect your hand gesture. Also, your fingernails can be used to scroll and interact with the pc easily.

This AirBar makes it possible to interact with Windows® 8 and 10 gestures. It was developed by
Neonode’s zForce AIR™ technology.

The minimum requirements of operating system the device support Windows 8 and higher and also Chromebook.

Also, AirBar not working with MacBook becuase no official support for this device in OSX Operating System and MacBook. But there is nothing bad in trying.

This is all about How To Add Touchscreen To Laptop | Non-Touchscreen. Kindly share and comment.
PublisherWisdom UchePosted atMonday, November 05, 2018 2 comments
Labels#Pc tricks