Share
Apple has released a new iOS 11.2.6 update for the iPhone, iPod toiuch and iPda devices. The update has some minor but important fixes. 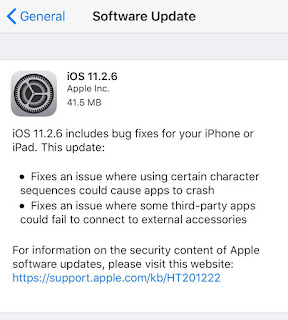 This new iOS update wasn't in beta or oxygen test before released to the public. Instead, it is currently tested by the developers.


The iOS 11.2.6 update fixed bugs on iPhone and iPad. The character in the Telugu language cause s apps to crash has been fixed by this update.

The update is still rolling out to all iOS users. Update as soon as possibble. Kindly inform others.