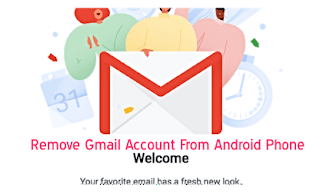 You and I can easily just remove the Gmail Account without even Restoring the device to Factory Reset. In fact, it is recommended you don't Factory rest, Why? Doing so can make the Android Phone Locked to Google Login and you'll have to input the Gmail Account username and password which obviously, you wouldn't know, making the issue complicated. Anyway, if that's the case, there is a tutorial coming up to bypass that.

How To Remove Gmail/Google Account From Android Without Factory Reset

I have screenshots of how I did this on my Android Device that isn't even rooted. Make sure you follow the tutorial.

See Also: Fix "There Was a Problem Communicating with Google Servers"

2. Scroll Down To Accounts (Or head to Google Accounts) Directly.

3. Under Accounts, Tap it and You'll see the Gmail Accounts Associated with the device.

4. Now Tap on the Gmail Account, you'll see some Sync Options, Ignore them.

7. The Gmail Account will be removed from the device alongside all its messages and Data, you don't need Factory Rest again.

This Android Trick works on All Android devices, my phone is Marshmallow 6.0 and it works just fine. Share this trick with friends and bookmark this page because a friend might need this.