Share
Realme is the latest phone from Flipkart getting attention recently, the device will feature an ultra-wide-angle lens, quad cameras, and the device will come in two variant - Realme 5 and the Realme 5 Pro. 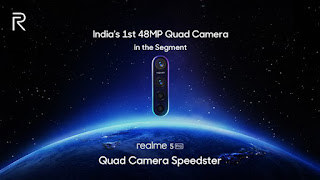 The Chinese company revealed its first 48-megapixel camera phone that will sport a Samsung ISOCELL Bright GW1 image sensor. This  Realme 64-megapixel was being teased and this made fans surprised to see a 48MP instead of the expected 64MP.


Read Also: How to Increase Gaming Performance on any Android Phone

Also, Flipkart microsite reveals that the Realme 5-series phone is launching in India on August 20. The launch will take place formally at 12:30pm and the phone will come with a "large pixel size" and "large aperture" lens.

Check Out the Teaser Video Officially from Flipkart on Youtube Below.


The Realme 5 Series will also have a secondary sensor with an ultra-wide-angle that carries a 119-degree field-of-view, a tertiary sensor with a super macro lens sporting a focal length of 4cm, and the fourth sensor with a portrait lens.
PublisherWisdom UchePosted atTuesday, August 13, 2019 Post a Comment
Labels#Latest Phones and Gadgets, #Phone Specs, #Realme 5, #Tech news