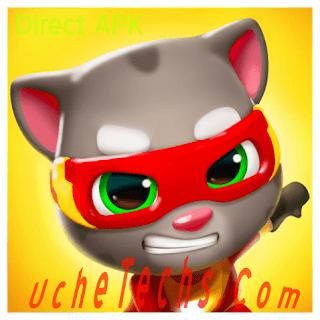 Talking Tom Hero Dash App is a new game and it became available for download on Google play a few months ago, the game has been getting numerous updates since it's release on June 4, 2019.

Talking Tom Hero Dash App has been classified as an Action Game, although when playing it, it seems like an arcade runner game like Temple Run and Subway Surfers. This new game is very similar to those games because it's mostly running and dodging.

Talking Tom Hero Dash is an endless runner game, and you are on a mission to take Talking Tom to run as fast as he can, get Golds and rebuild the world by defeating other obstacles on the way.

Talking Tom Dash Apk has many cool and interesting features adults can enjoy when they are less busy and also kids will find fun to play. I listed just 8 features of Talking Tom Hero Dash App for Android and iOS devices. 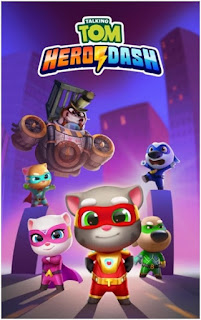 1. Although you start up with Talking Tom when playing, it's not limited to that. Talking Angela and other of his friends are also located in the game. They can be unlocked as you progress in the game and they have unique superpowers which obviously differs.

2. There are bad guys who will try to make you fail your mission, this is obviously the reason it was categorized as an action game by outfit7 limited. Some bad guys are the Raccoon Gangs, you need to avoid them because they are placed strategically for you to mistakenly hit them, but you can attack while running to defeat them.

3. Talking Tom Hero Dash Apk also have bosses besides the lesser villans which might be easy for you to defeat, when these bosses are defeated, new characters will be unlocked like Talking Angela.

4. New locations can be unlocked in this game, villages like Chinese lands, tropical surf beaches, skyscrapers, and some weird desert temples.

5. There are cool stunts to perform in Talking Tom Hero Dash App when running in the world and exploring, you can leap between rooftops like you do on runner games, also you can run along with ships and even swim in waters.

6. There are so much more besides the 5 features of Talking Tom Hero Dash App mentioned so far, you can also rescue nature by stopping water pollution which can intentionally be caused by the bad guys, the raccoons. When done preventing this, you will face their boss and have a chance to defeat him. Are you up to the task? 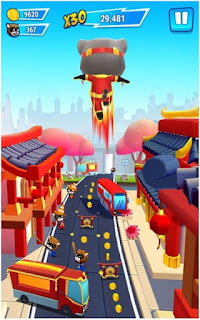 Other Interesting Games Are?
7. There are many cool kits available in the dressing room which makes your outfit design awesome. You can even customize them to change the feel and look to your satisfaction.

Ok, now you have seen how awesome this game is for you and your family, this game is very entertaining and it's best enjoyed at your leisure time when you are resting. Your kids can also play Talking Tom Hero Dash game to enhance their IQ and for you to see how sharp they are.

Requires Android: 4.4 and up 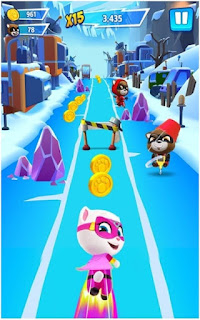 There's no direct download link of Talking Tom Hero Dash App for iOS (iPhone, iPad) devices, so the Appstore is the only solution, but don't worry it's FREE. 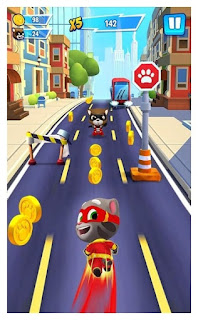 This game does not have OBB and DATA Files, only APK File which can be easily installed and played offine for Free.

What You Should Know


While playing Talking Tom Hero Dash App, you might need to get coins to buy new characters or other important factors that make you finish the game faster. The game supports in-app purchases from ₦405.00 - ₦41,000.00 per item for Android, while ($1.99 - $99.99) for iOS devices.

This game is very interesting and you know what I do, bringing your attention to games you are interested in. If you've downloaded and played Talking Tom Hero Dash Apk, share and comment, thank you.