Share
The Full Specifications of the most awaited Vivo Z1x device has been leaked ahead of its launch in India September 6 (five days from now). The phone was only teased officially on Flipkart to feature triple back cameras, in-display fingerprint and waterdrop-style notch ut recently the full specs got leaked. 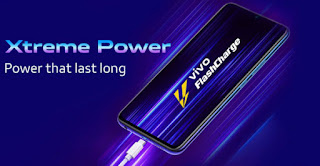 The rumored leaked suggests the phone will come with a 4500mAh battery with 22.5W VOOC Flash Cahaeg support and also will be powered by the Snapdragon 712 SoC. The official date and time of the launch of Vivo Z1x are 12pm IST on India five days from now, then the leaked specs will be confirmed.


The expected Specifications of Vivo Z1x


GSMArena has revealed some technical details of the upcoming device and the leak suggest the phone will be running on Android Pie (9) and will feature a  6.38-inch full-HD Super AMOLED display. The phone will also come with 6GB RAM and the Internal storage is tipped to be offered in 64GB and 128GB options.

Over to the Cameras, the Vivo Z1x' comes with triple camera setup and it will consist of a main 48-megapixel main Sony IMX582 sensor and depth sensors camera. The front selfie camera is 32MP and it also features a video calling.vivo z1x teaser.

The phone will arrive in these two colors, Blue and Purple glossy gradient finish. The phone has a vertical triple rear camera with the flash sitting beneath it.