Share
Samsung is currently working on a new Galaxy Fold device which will roll out on September 6. This new device will be cheaper than the current Samsung Galy Fold handset with 512GB internal memory which is priced at around $2000. 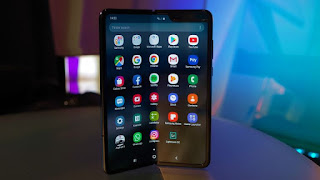 The Previous Galaxy Fold is so expensive that only a few were able to afford the device, so now Samsung worked on a lower version of the device which has good specifications and a reduced price to $1000 which most people might be willing to pay.

The company plans to reduce the design and hardware functionality such as the Internal memory which was slashed from 512GB to 256GB storage, SamMobile reported on Friday.

"The new Galaxy Fold that's currently being developed bears model number SM-F700F. We're told that it will come with 256GB of internal storage, half of what the Galaxy Fold features. Little else is known about this device right now," the publication wrote.


1. The Galaxy Fold comes with a 7.3-inch primary flexible AMOLED display and a secondary 4.6-inch screen.

3. The Galaxy Fold comes with 12GB RAM and 512GB for the premium while 256GB for the lower version.

5.  The device also sports a 10-megapixel camera on the front for selfies.

See Also: 5 Simple Steps To Get Water Out Of Your Phone

The Galaxy Fold was first unveiled at MWC 2019 in Barca a few months ago and the company also planned to launch a new model which is foldable on April 26 priced at $1980 but rescheduled the launch to fix issues shared by those with early access.
PublisherWisdom UchePosted atSunday, September 01, 2019 Post a Comment
Labels#Latest Phones and Gadgets