Twitter Acts on Reduction of Insults With Limiting Replies Feature

Share
Social Media Giants are now focused on what the public uses their platform. The effort made by Twitter helps reduce the amount of online abuse and harassment surfacing daily on the platform. This gives the user extra hand by limiting which users can comment, region and lots more. 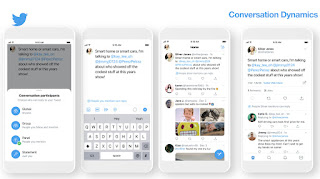 "We want to help people feel safe participating in the conversation on Twitter by giving them more control over the conversations they start," the San Francisco-based company said in a tweet.

Despite the fact Twitter launched a feature in December last year which allows users to hide certain replies on their tweets, they are currently experimenting on adding more controls for users to want to limit what can be said on their tweets or who can reply them on comment sections.

The new update is an effort to clean up abusive content and also make the social media platform more user-friendly. In a presentation at the annual CES tech conference, Plans were also made to improve these features as a report from several tech media like The verge.

According to the presentation, users have the ability to choose new four different settings for replies such as:

1. Global
This feature allows anyone from anywhere to comment on your Tweets with no restrictions.

2. Group
As for Group, people allowed to comment are from people a user followed or mentioned.

3. Panel
This is a group of people mentioned in a tweet or who has a statement.

4. Off
This allows no one to comment or reply to your tweets, everyone is restricted, useful for those who have little or no comments on tweets.