Share
Facebook has a new look on its desktop software for Windows and Mac devices. This new look was reportedly rolling out to a few numbers of people, it was also said it will fully roll out for everyone by April (Spring) this year, according to report. "The New Facebook Computer design is beautiful, fast in loading as like mobile and still is faster than the Facebook web version. 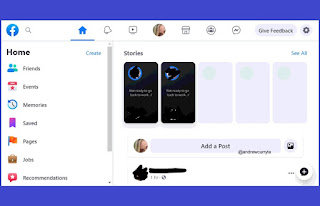 Facebook for Desktop new design early access hs already begun for a random small number of users, According to Cnet. Probably, you might see this new feature if you were selected to test it.

"The New Facebook" has some minor changes in the design and it is focused more on Facebook's other offerings. The new update also features Dark Mode which the Mobile version has, also on Messenger. If you changed to the new Facebook design, you still have the option to re-change it to the old design just in case you do not like the new update.


Opinions from users are also welcomed, Facebook uses this means to know if the new update will be welcomed by users, so they created a feedback feature that users can answer or leave a suggestion on how to improve the design before it is rolled out for everyone else.

Facebook for Desktop can be gotten on Microsoft Store for Windows Users, recommended if you use Windows 8 or 10.
PublisherWisdom UchePosted atMonday, January 13, 2020 Post a Comment
Labels#Facebook