Share
Samsung's upcoming wave of flagship phones, the Galaxy S20 Series, has appeared online. The Samsung Galaxy S20+ 5G device has been confirmed to feature Quad Rear Camera design, also it has a front camera display hole-punch (Infinity-O design) design, here are what you should know. 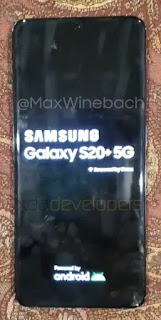 The leaked images show the Galaxy S20+ 5G will come in a black color alongside a glass-made rear panel skin. Looking at the leaked image, you will see a huge camera bump, the trending type of rear camera designs, such as the iPhone 11. Here come the main features, the Galaxy S20+ 5G will feature a 108-megapixel in-house ISOCELL sensor and a 48-megapixel telephoto lens with 5x optical zoom ability.


That's for the rear camera, now as for the front, the Samsung Galaxy S20+ 5G will feature a centered hole-punch just like the recent Samsung devices, with exception to the A-series.

The report also adds the device will feature a 2.5D curved glass panel but will look like a flat-screen glass. Another notable feature is the removal of the dedicated Bixby button on the device, you can google search that to know what it does. These were the only known features for now, when more surfaces, there will be more specs to talk about.
PublisherWisdom UcheDate & Time1/13/2020 01:35:00 PMcomments Post a Comment
Tags#samsung, #Tech news