Share
The iPhone SE 2 which is a successor of the SE model has leaked specs such as the confirmed iPhone 8-Like Single Rear Camera deign. The iPhone SE 2 is set to launch this year, it has been rumored to also feature think bezels, Touch ID button, and a 4.7-inch IPS LCD Retina display. 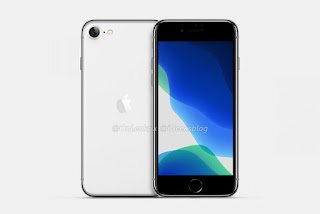 Since the device has some similarities to the iPhone 8, some believed it might debut as iPhone 9 which Apple decided to skip from 8-11.

The photo leaked by @OnLeaks shows the device with a stainless steel frame that looks as if it was picked straight from the iPhone X. Despite the fact it looks like iPhone 8, it will definitely have differences internally, we've seen some differences already externally. The iPhone SE2 also features the iPhone 11 Pro frosted glass finish skin and stainless steel frame, almost like the screen is edged, but not.


More rumors say the iPhone SE 2 will pack the in-house A13 Bionic processor currently used in iPhone 11 devices. The home button also is circular and it has the Touch ID fingerprint sensor.

The phone is likely said to be the successor of the iPhone 8 due to its similarities and improved design, so it could be called iPhone 9 by fans and users.
PublisherWisdom UchePosted atMonday, January 13, 2020 Post a Comment
Labels#Apple, #iPhone, #Tech news