Share
The Nokia 5.2 Hands-On Images leaked, this confirms so many speculations about the smartphone such as the Ring-Like Quad Rear Cameras design. In addition, the Nokia 5.2 is expected to launch at Nokia brand-licensee HMD Global on February 23 in Barcelona where numerous Nokia Gadgets will be launched. Here is more information about the leaked image of the Nokia 5.2. 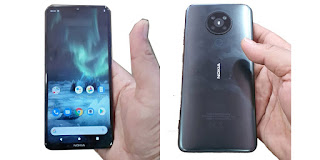 Looking at the featured image on this post, you can see a not too clear quality of the smartphone, but it is enough to know what we need to know. The device front-facing picture shows the device has a waterdrop notch at the top, the Nokia branding near the on-screen buttons as well.

The Tipster Evan Blass who leaked the smartphone on Twitter when further to say that the Nokia phone depicted in the images carries the codename 'Captain America', probably it was an unsure statement following a question mark (?) suggesting the name might later turn out to be something else. We got nothing about the processor when asked by his followers, he returned a rude reply, so updates later might surface somewhere else.


The Nokia 5.2 which features a circular camera module with a ring-like arrangement of lenses also has a dual-LED flash at the center of the four radially positioned rear cameras. The leak also says the device packs a 6GB of RAM and a 64GB internal memory storage, no mention concerning how much you can upgrade the external storage.

Nokia 5.2 price is $180, when it will be released around March 4 and launch date February 23. It might interest to know that the first leak shared last year suggested the device will sport triple rear cameras rather than four and it was said to be called 'Nokia Daredevil' to pack the Snapdragon 665 SoC, but this new update suggest otherwise, but the launch date is this month, confirmed specifications will be known by then.