Share
Samsung Galaxy S20 Series and Galaxy Z Flip which will be launched on Tuesday got some new fresh leaks. For some while now, leaked images have been surfacing online and specifications, now more details such as the tip price for each device are now available. Check out the price of the Samsung Galaxy Z Flip, Galaxy S20. 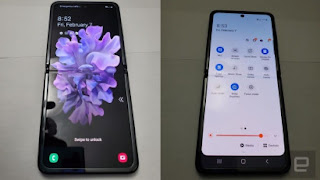 Starting with the Galaxy S20, the official poster of the Ultra 5G has been leaked by a tipster, also he mentioned the device will feature 100x Space Zoom, Single Take, and Bright Night. In addition, the phone will come with a 6.9-inch WQHD+ (1440 x 32000 pixels) Super AMOLED display, up to 16GB of RAM, 512GB storage, and Snapdragon 865 SoC. The retails packages have also been said to include an AKG-tuned USB Type-C headset and a 25W charger.

Heading to the Galaxy Z Flip new leaks, it comes with the Infinity-O design, a cover in the retail package as said by a tipster Ishan Agarwal. The product manual of the device shows it as an optimized UI and it also shows it features an ultra-thin glass over the foldable panel. Here are the leaked specs, it has been said to include Snapdragon 855+ SoC, 8GB RAM, 256GB storage, 6.7-inch full-HD+ Super AMOLED display, and a 3,300mAh battery.