Share
Google Chrome now has a wireless sharing feature that works just as Apple's AirDrop sharing feature. This new update is being rolled out to some Windows users, soon all will get the new update. 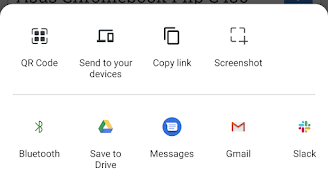 In other to use it, on your Chrome Dev or Canary channel, open chrome://flags page, and choose the Nearby sharing option that is on the list. Then enable it and restart the browser. Finally, head to chrome://nearby which shows all the supported devices that can you share files with.
This new feature works on all Windows PC version with Bluetooth support. Also, there are little limitations here, you need to have a compatible Pixel phone or a Chromebook. So for the devices to detect the PC, it needs to be unlocked and very close to each other.
See Also: Netflix Inactive Account Subscriptions Will Be Canceled
So using this feature, Android users can share anything such as photos, videos, etc from their phone to pc or otherwise. The Nearby Share feature test for the service via Google Play Services Public Beta Program is no one. It will be available for Mac and Linux later as Google says they are making plans for that.
PublisherWisdom UchePosted atFriday, July 31, 2020 Post a Comment
Labels#Tech news