Share
Intel has officially unveiled the chips in its 11th Gen Core lineup and it comes with 9 CPUs in total. These are available across the intel Core i3, Core i5, and Core i7 families thin/slim and light laptops. Here's what you should know about the new intel 'Tiger Lake'. 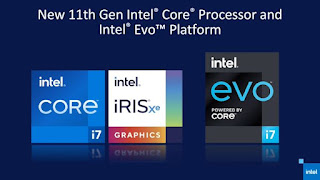 Intel has recently unveiled a new identity with a well-designed logo and geometric motif. Also, the Intel Evo branding has been redesigned which is aimed to deliver the best quality control and improved productivity.

Intel describes the 11th Gen Core family as the 'world's best processor for thin and light laptops', this will be available in over 60 types of laptop brands like Asus, Samsung, HP, Dell, Acer, and more laptops that will go on sale around the world late this year.

Furthermore, there are two new classes of new CPUs, they are UP3 which was known as the U-series that runs at 15W & Up4, while the second class is UP4 that was known as the Y-series, this runs at 7W. 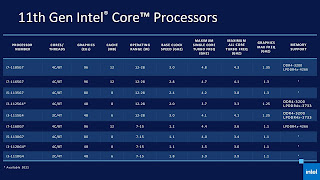 The Core i7-1185G7 has 4 cores with H-Threading that runs at a base frequency of 3GHz with all-core and single-core boost speeds of up to 4.3GHz and 4.8GHz respectively which also features Intel Iris Xe graphics with 96 execution units. The Core i3 models use Intel's older UHD graphics hardware and have only two cores with Hyper-Threading.

The 11th Gen Core ‘Tiger Lake' family aims at providing 2.7X faster performance than the competition in specific creator usages, such as upscaling photos, which use Intel's DL Boost extensions and integrated AI processing hardware. It has built-in AI that improves collaboration like removal of noise in video conferencing software.

Intel claims users can expect up to 2c higher FPS in demanding games like GTA V at 1080p. Intel says laptop OEMs will be able to offer reasonable gaming quality in compact laptops that aren't designed to accommodate discrete GPUs.