A few days ago, Gettr - a Pro-Trump social media app launched recently by Jason Miller, a senior adviser to former US President Donald Trump, got hacked as over 500k people registered on the site in a day. 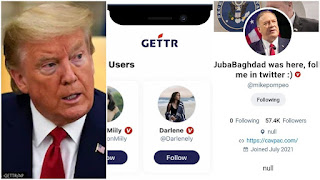 Gettr is a similar social media app like Twitter, it contains the latest posts and trending topics, it advertised itself as "a non-bias social network for people all over the world.", it can be seen on Google Playstore and Apple Appstore.

"The problem was detected and sealed in a matter of minutes, and all the intruder was able to accomplish was to change a few user names," Miller said in an emailed statement.

A screenshot was posted on Twitter of several Gettr profiles which also includes former secretary of state Mike Pompeo and Jason Miller shows the profile with the text "JubaBaghdad was here, follow me in Twitter :)"

A writer for Salon posted screenshots on Twitter of several Gettr profiles, including those of former Secretary of State Mike Pompeo and Miller himself, that were altered to read "JubaBaghdad was here, follow me in Twitter :)"

When asked about the security issue faced on the app, Miller clarified the situation by saying it has been "rectified".

There is still no information regarding if Trump will be joining the new website. Miller told Fox News earlier this week that he hoped Trump would join.