The Witcher: Monster Slayer game that was only available for Microsoft Windows and macOS will now be coming to Android and iOS on July 21 globally. This is a very addictive free-to-play AR and RPG game developed and published by Spokko. 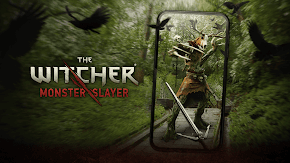 The upcoming mobile game is already available for pre-registration on Google Play Store, and by pre-registering, you get an in-game reward as part of your inventory. The Witcher: Monster Slayer game is based on the books by author Andrzej Sapkowski and the games developed by CD Projekt, the universe is set in the Witcher universe.

The mechanics of the game are similar to Pokemon Go, but it features the creatures and characters from the Witcher universe. Players are still able to play as new 'witchers' and have access to location-based gameplay where they can fight a variety of monsters. This can be done by physically exploring the world around them.

“In Monster Slayer, players will see the world around them transformed into the dark-fantasy realm known from The Witcher universe. As a freshly trained witcher themselves, they will engage with location-based gameplay and advanced augmented reality features to track down and hunt bloodthirsty monsters lurking nearby,” the post by CD Projekt reads.