Microsoft confirms in its new operating system Windows 11 that the warning screen Blue Screen of Death (BSOD) will now be changing to a black screen of death. 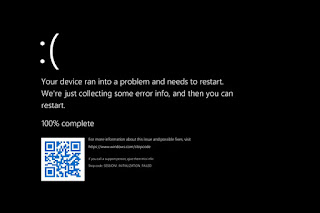 As reported by Verge, the American tech giant Microsoft started testing its new design in a Windows 11 insider preview build which users can currently enroll in, but the Black Screen of Death is yet to be fully enabled.

This will be the first major change to the BSOD since 2012 when Microsoft added a sad face to the warning screen in Windows 8. The BSOD was first introduced in Windows 3.0, this helped IT professionals and support personnel diagnose hardware/software and memory faults with the pc.

With a BSOD, you are able to check for bugs on the pc that resulted in the operating system crashing, for example deleting system 32 can cause the BSOD, with the warning screen you are able to see a dump of data that can help you analyze and know what caused the blue screen.

This change to Black Screen of Death in Windows 11 is still identical to the one found on Windows 10, just the background changing from blue to black, so the sad face remains the same, as well as the stop code and crash dump.

However, the Windows 11 preview still includes a green BSOD screen as that is the custom color for all Windows Insider builds since 2016.

The reason for this change from blue to black screen is yet to be known, Microsoft is yet to say anything regarding this new development.