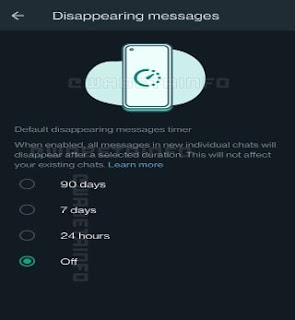 The default disappearing messages timer can be located in the disappearing messages section via the app's Privacy Settings. There, you will be able to set a time limit in which a sent message will disappear, the available time limits are — 90 days, 7 days, or 24 hours.
See Also: Ethiopia Plans on Developing a Rival Social Media Platform to Facebook, Twitter, WhatsApp
There will also be an upcoming feature that will be available as an extension to the existing WhatsApp disappearing messages feature, this allows users to delete messages in a specific individual and group chats after the preset period of seven days.

This is just one of the many upcoming features on WhatsApp this year, it was reported that the company is also working on a voice message transcription feature for iOS users which is currently not available on WhatsApp. So soon, there won't be a need to make use of third-party apps for the transcription of voice messages on your iOS and Android phones.

Telegram still being used around the world has these features intact for a very long time, hard-core WhatsApp fans will be so delighted to see WhatsApp coming up with a new disappearing mode time limit feature and future scheduled updates.