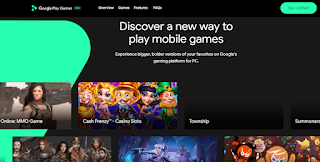 Google listed some supported game titles, they include Asphalt 9: Legends, Magic Rush: Heroes, Rise of Empires: Ice and Fire, and War Planet Online, these will be available as part of the limited beta. Currently, only users in Hong Kong, South Korea, and Taiwan has access to the new Google Play Games beta. Other regions are allowed to sign up so as to know when it's available in their locale.

Based on the article via the Google Play Games beta site, gamers who live in Hong Kong, South Korea, and Taiwan will have access to the Google Play Games desktop app on their Windows laptop or desktop computer, after signing up for the beta. Furthermore, the website stated that gamers can sign into their Google account so they can easily sync their progress from phone to PC or vice versa.

Google is yet to reveal a full list of games that will be supported on the Google Play Games beta for Windows PCs, however, they said the games has been optimized in association with the developers. Games will also be subjected to safte checks, while gamers' purchases on Google Play Games will count towards gamers' Google Play Points, including in-app items and subscriptions.

Finally, speaking of the PC requirements to enjoy Google Play Games on Windows PC, gamers must be running Windows 10 (v2004) or later with an octa-core CPU, paired with 8GB of RAM and 20GB of SSD storage. Also, they'll need a "gaming-class" GPU and a Windows account with administrator privileges, while hardware virtualization should be enabled. As said earlier, the beta is set to "expand to other regions later in 2022 and beyond" while we await the official release date of Google Play Games for Windows PC.