WhatsApp for iOS latest update has included iPhone and iPad models to support playing of voice messages in the background. Users will now be able to listen to voice messages and audio files outside the current chat where the audio was sent from. 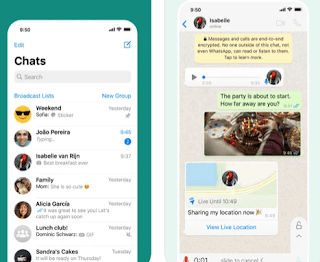 WhatsApp for iOS v22.4.75 allows users to "play voice messages and audio files outside of chats", the new global voice message player is available only on iOS. There is no information on when this feature will be available for other platform users such as Android and the Web/Desktop version of WhatsApp.

This feature finally released on WhatsApp was first spotted on IOS last month when users had the chance to check it out via beta testing. There was a screenshot from the beta test showing the new layout of the global voice message player on Apple devices. The player will be stuck to the top of the screen displaying a progress bar with the name of the user who sent the voice message - similar to that of Telegram's background voice message feature.

WhatsApp for Desktop will be getting the iOS feature as well, but this time, the player will be on the bottom of the chat lists showing the voice chat contact name.