If you want to explore in the dark with your device camera by improving the visibility of objects and creating an image based on that information, with the aforementioned thermal camera apps for Android and iOS, you can use your phone camera to detect the object infrared radiation.

How does Thermal Camera Work?

Thermal Imaging Apps use your phone camera to provide a similarity of realistic thermal images. Though these free infrared camera apps for Android and iOS might not be as precise as the actual gadget, the imitation of these apps is astonishing.

Knowing the use below contains the ten best thermal camera apps for Android and iOS, which implements an actual infrared camera with your smartphone.

Seek Thermal is one of the best thermal camera app available for Android and iOS smartphones. The app is able to successfully detect, inspect, measure, and visualize thermal energy from your mobile device. With the app, you can utilize your device as a predator vision with connect & detect convenience, take spot temperatures, and examine any object in daylight, darkness, or fog, navigate between multiple viewing modes and color palettes all with just your phone.
Download for Android | iOS 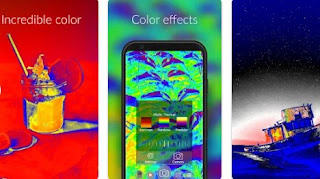 This is also another best thermal Imaging app for Android and iOS, this app is capable of applying a color gradient to the video stream of your built-in camera using your image color intensity. It further allows you to change the appearance of the colors like red, green, blue, e.t.c. Regarding the features, it supports VR, camera zoom, selfie camera, access to device camera flash for better image quality, both portrait and landscape support, and even easy access to your edited photos. 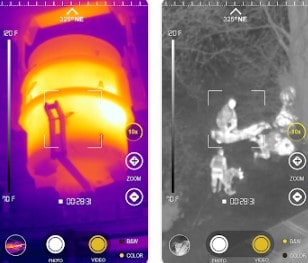 Thermal Imaging Camera claims it is not a Thermal vision infrared camera or binoculars app, but rather an app that uses  a powerful light enhancing algorithm for night shooting and high quality image processing zoom. Looking at the image above, you can see some cool details about the object being focused on; you can change the color, change the mode from video to camera, and even zoom on the object.
Download for Android | iOS 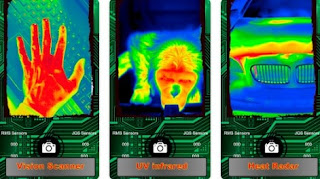 Here's yet another thermal camera app for mobile devices that has an inbuilt thermal vision simulation rader camera effect capable of simulating heat effects. The app allows you to filter your thermal vistion to show different detail levels, detects an object heat which can be helpful when looking for an object in the dark, it also helps you know if there is a hot spot near you while you monitor the Heat Map. So this is an app you should check out.
Download for Android | iOS

For the list of best thermal imaging camera apps for Android and iOS, we have also included Thermal Cam Effect Simulator app. However, this is not really a thermal imaging camera app for Android and iOS, but rather a prank app that behaves like some actual working ones so far. With this prank app, it changes the output of your video or camera and provides view which is very similar to vision from hardware thermal camera.
Download for Android | iOS 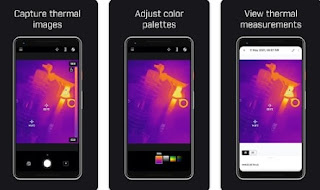 Flir One is capable of helping you detect thermal with your smartphone which will inturn assist you in inspecting electrical panels, find the source of HVAC failures, or discover hidden water damage. The app can scan for faults with the thermal camera view and capture photos and videos to your gallery, it is also able to track the hottest and coldest spot with aids the efficiency of troubleshooting. Futhermore, You can adjust the IR scale to highlight the problem, save notes/photos of your findings, and even share them with anyone.
Download for Android | iOS

Here is another fake thermal camera app like the Thermal Cam Effect Simulator mentioned earlier. Thermography Infrared Camera simulator will allow you prank your friends into thinking you can explore the world in a cool way with your device. It is able to add some color gradient on the object being viewed with your camera which inturn makes it very similar to a real thermal imaging camera app.
Download for Android | iOS 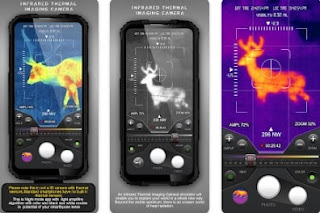 Infrared Thermal Imaging Cam provides users with a night mode capability that uses its light amplifier algorithm to provide similarity to a thermal camera. In addition, the a is able to give users Infrared stamp photos and videos with info, bubble levels ,GMT and local times, and visibility. Several infered colors available such as black, white, red, yellow, purple, and pink. So if you are looking for the best free thermal imaging apps for Android, then this is for you.
Download for Android | iOS

As the app's title suggests, this will not be able to give you an actual imagery of thermal with your camera, but can be useful into pranking others it works as a thermal camera app.  With the app, you can quickly save images and videos with just a single tap of a button, take quality images and videos with the support of your front or rear camera flash, makes use of any extra camera button on your device (if available), it also provides temperature metering in Flir mode and comparison with the thermal.
Download for Android | iOS

On our final list of Free Thermal Imaging Apps for Android / iOS 2022 is comes Thermal Camera VR: Sim/Prank app. This app with 500k installs on Google Playstore is able to use tonal mapping to simulate the thermal view and Uses Flir USB device ir data for the same in Flir mode. Like the previous app mentioned, this can supports Flir One and Flir One pro, record Video in VR mode, and provide multiple thermal camera profiles or effects.
Download for Android | iOS
PublisherWisdom UchePosted atSaturday, July 30, 2022 Post a Comment
Labels#Android, #Apps, #Top list