Official New Emojis for Android and iOS Coming Soon: What to Expect?

A preview of the upcoming new emojis for Android and iOS has been unveiled ahead of World Emoji Day 2022 on Sunday. Sample images for Emoji 15.0 can now be seen, here are what you should expect. 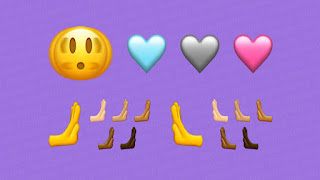 According to Emojipedia, up to 31 emojis will be available for Android and iOS, they will most likely be released this year 2022 and the rest in 2023. A few emojis approved to be released next month include a Shaking Face, two Pushing Hands, a high-five symbol, and a plain Sky-Blue Heart.

More inclusions of Emoji 15.0 include a light pink heart, a grey heart, a hair pick, and more. The draft list of emoji 15.0 might be changed from now to the expected release date in September. Furthermore, samples of the new emoji include animals like jellyfish, donkeys, birds, e.t.c

Emojipedia noted `In total there are 31 recommended emojis for Emoji 15.0, which is significantly less than the 112 recommendations last year and the 334 in 2020. In fact, it is the smallest number of new emojis that Unicode has ever recommended at any one time.`

The drafted list of Emoji 15.0 will be finalized and released by the Unicode Consortium by September 2022, while further emojis will be released in 2023.