WhatsApp has announced new privacy-focused features that give users “more control over their conversations and added layers of protection when messaging.” Three new privacy features were announced, and I have reviewed them and how they work. 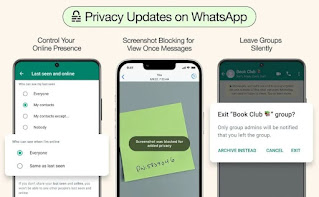 WhatsApp's three new features announced include the ability to exit group chats without notifying everyone, control who can see when you're online, and prevent screenshots on view once messages.

“We'll keep building new ways to protect your messages and keep them as private and secure as face-to-face conversations,” Zuckerberg said in a statement. The company said that it is also starting a campaign to educate people about the new features.

Below contains a brief explanation of how the three new WhatsApp features tend to work. I have broken it down for an easy understanding.

1. Leave Groups Silently: With this feature enabled, users can leave group chats without the "Name/Number left" message displaying. Only admins will now have access to the notification and text that a user has left their group, the members will not know. This feature will be rolled out to all WhatsApp users for Android and iOS this month.

2. Hide Online Status: When this feature is enabled, contacts or non-contacts will not be able to see your online status, just as when you disable your last seen status. The feature can either be set for everyone to see your last seen, or set based on your current last seen feature - be it everyone, contacts, contacts except, or nobody. It will roll out to all users this month as well.

3. Prevent Chat Screenshots: When enabled, your contact or non-contact will be unable to screenshot your sent message/media when you enable the 'View Once' feature. Previously, a view once only prevents the user from taking a screenshot of your message/media, this allowed users to bypass this by taking screenshots. However, WhatsApp has added an extra security to this to prevent screenshots from being taken. This feature will be rolled out soon!

So these are the three new features announced, adding to the already present security on WhatsApp such as end-to-end protection for calls and messages, 2-step verification for added security, end-to-end encrypted backups, and disappearing messages that self-destruct and prevent users from adding you to group chats.