Share
Samsung Galaxy A71 and Samsung Galaxy A9 have been confirmed to launch in Netherlands market in 2020 and it will be available with Android 10 operating system from the box. Here's what we've come to know concerning these insane devices! 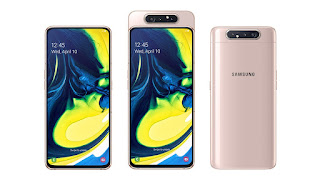 The Samsung Galaxy A71 and Samsung Galaxy A91 will launch in the Netherlands -  GalaxyClub reports. The phone will ship with Android 10 out from the box, unlike other devices like A10, A30s which were only upgradeable to higher versions. The phone will definitely be available just after the launch of the newly anticipating Samsung Galaxy S11 Series in February or March. Reports also suggest the devices will launch in countries like Spain, Germany, Italy, England, and many more European markets.

As for the device specification, this was suggested; Galaxy A71 may be powered by a new Exynos 9630 SoC that the company is working on. This chip is made for mid-range phones and will be first seen on the Galaxy A series phones next year. This has bot been confirmed yet as it's just a rumor. Speaking of rumor, the Samsung Galaxy A71 will also feature 4 (Quad) rear camera with a 48-MP main sensor, a 12-megapixel wide-angle sensor, a 12-megapixel telephoto lens with 2x optical zoom, and a Time of Flight (ToF) fourth sensor.

While the Galaxy A91 will feature a 108 MP main sensor, which is very wonderful, it will also come with a 16-megapixel wide-angle sensor, a 12-megapixel telephoto sensor with 5x optical zoom, and a ToF sensor. Samsung 108-megapixel sensor to be featured in the Galaxy A91 is called ISOCELL Bright HMX and Samsung said the first phone to come with this sensor would be Xiaomi.

The Samsung Galaxy A91 is rumored to sport a 6.7-inch display with a hole-punch design, as for the selfie front camera, it's at the center, almost like the Note 10 Series, and finally, the phone supports 45w Fast charging.

These are some rumored specs, if there are any updates concerning these devices, it will be updated and we love to hear your suggestions.
PublisherWisdom UchePosted atFriday, August 30, 2019 Post a Comment
Labels#Latest Phones and Gadgets, #Tech news