Share
Panasonic Lumix DC-S1H is the world's first Video Recording Gadget to feature 6K Video Recording. It has been launched and users have started uploading test videos on Youtube and other social platforms. This new gadget is here to deliver cinema-quality video output and single-lens full-frame mirrorless camera. 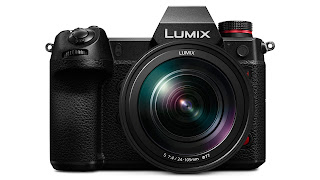 The Lumix DC-S1H sensor's resolution features 24.2MP and it comes with the new Dual Native ISO.

The Lumix DC-S1H is the "world's first camera capable of video recording at 6K/24p." says Panasonic. Also, the camera will be able to get ISO 51200 during recording and will reduce background noises as well. The camera has unlimited time as you have seen from the key specs, this was achieved through the company's hear dispersion technologies. The Lumix S1H can also record at 5.9K/30p (16:9 aspect ratio) and 10-bit 60p 4K/C4K.

This device is actually the world's first camera capable of video recording at 6K/24p (3:2 aspect ratio). I have embedded a video below showing how clear the camera quality is.

The Lumix DCS1H also reduces shaky shots by the combination of 5-axis Body IS (Image Stabiliser) and 2-axis OIS (optical image stabilization) which stabilized footage for as low as 6.5-stop slower shutter speed.


This is what you've been looking for, oh well, here it is, the Panasonic Lumix DC-S1H (body-only) has been priced at $3,999.99 [N1,451,928] and it will be available for purchase at the end of next month September. The official release date for next month or Indian price will be known soon.
PublisherWisdom UchePosted atFriday, August 30, 2019 Post a Comment
Labels#Tech