Share
Whatsapp keeps improving not only on Android for its users but also on iOS devices. Recently, Whatsapp is working on rolling out Audio Playback feature for Whatsapp on iOS. If you are an iOS user and want to know how this feature works, read on. 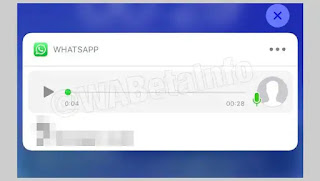 Whatsapp Playback Feature has been spotted in iOS beta 2.19.91.1 beta version from TestFlight and this audio playback works for voice playback and audios files too. WABeatInfo confirmed only a few beat users will be getting this WhatsApp new feature in the meantime till it's officially rolled out.

In other to test this audio playback feature, iOS users needs to be on the latest Whstapp 2.19.91.1 iOS bear from TestFlight. To test this, send an audio file or voice message from one phone to your supported iOS devices, before playing the audio on your iPhone notification to see if this feature is available to you or not.

Read Also
If it's available for you, audio can be played continuously without user interaction, but note that WhatsApp Business beta for iOS 2.19.90.8 is also eligible to remotely get the feature.

If it's not available for you, try reinstalling the application after backing up your chat history and then it might work. WhatsappBetaInfo says the audio file playback might be available for your device in beta if the last digit of your phone number is even, while if the last digit of your number is old means you can get the voice message playback.
PublisherWisdom UchePosted atThursday, September 05, 2019 Post a Comment
Labels#iOS, #Tech news, #WhatsApp