Share
Whatsapp has yet again withdrawn support for another Gadget, this time it is iPhone. Actually, WhatsApp will stop running on iPhones running on iOS 8 Next Year which means they can't create an account on that version. 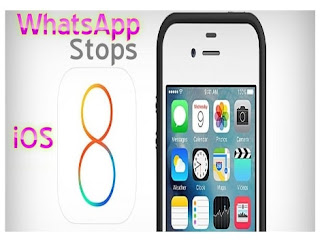 This is not the first time WhatsApp is doing something like this, they've stopped support for Windows Phone and also Blackberry devices.

Learn this:
But this time, it doesn't target a specific device but iOS, if your iPhone is running on iOS 8 and it is upgradable to iOS 9 or later, then you can run WhatsApp and create new accounts or reverify.

WhatsApp said if After February 1st Next year, if your iPhone device is not upgraded or Upgradable, then it will not be able to use their App again. Make sure you check for updates or get a higher iOS device which version meets the requirements to use WhatsApp continuously.

"For the best experience, we recommend you use the latest version of iOS available for your phone," WhatsApp said."We don't explicitly restrict the use of jailbroken or unlocked devices. However, because these modifications might affect the functionality of your device, we can't provide support for devices using modified versions of the iPhone's operating system," it added.

Nevertheless, Android users aren't left out in this update, WhatsApp also added that Android version 2.3.7 and older will not be able to use WhatsApp again nor create new accounts except it is higher than that version from Feb 1, 2020.

If your iOS device isn't compatible for an update, you can make use of one WhatsApp account on multiple devices or two devices which versions are more than the requirements, that account will still be usable.

This update is to improve user experience and reduce the risk of vulnerability on its application.
PublisherWisdom UchePosted atMonday, September 30, 2019 Post a Comment
Labels#Apple, #iOS, #Tech news, #WhatsApp