Share
Rumors always surface when the release date of smartphones hasn't even been talked off, now a leak is available for Samsung Galaxy S20. The device is expected to be announced next month, but a hands-on video has surfaced online. 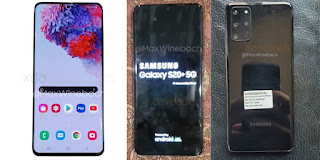 Max Weinbach of XDA Developers who leaked the specs said the phone is a successor of the Galaxy S10. The 13 seconds leaked video also shows the phone has four rear cameras, Infinity-O Display, and a LED flash, it has no 3.5mm headphone jack but will pack an AKG USB Type-C earbuds.

As per the charging, the S20+ has Super Fast Charge with 25W fast charging support. The display is also 1440 x 3200 pixels and a 20:9 aspect ratio. Obviously, it has a fingerprint sensor at the back, but not an optical one, but ultrasonic.


“The Galaxy S20 does not light up the fingerprint area (other than the display's regular brightness levels), which essentially confirms the ultrasonic sensor,” the report by XDA Developers notes.

It will also feature a  Smart Selfie Angle, Single Take Photo, and a Pro Video. More features will be known and confirmed in no time, stay updated.
PublisherWisdom UchePosted atThursday, January 16, 2020 Post a Comment
Labels#samsung