Share
Samsung Galaxy A31 confirmed specification has been announced and it features 5,000mAh battery capacity. The Galaxy A31 is a mid-range smartphone with cool specs, imagine that it features quad rear camera setup, same design as M series. 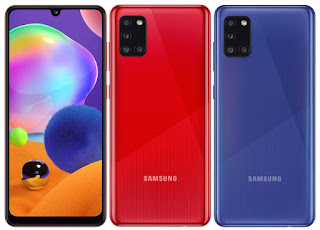 Speaking of the Galaxy A31 processor, it comes with an octa-core processor clocked at 2.0GHz, and six at a 1.7GHz frequency. We are yet to know which processor it will make use of but reports believe it will feature MediaTek Helio P65 SoC rather than Samsung Exynos.

The device also comes in two RAM options, 4GB and 6GB RAM, along with two storage options of 64GB and 128GB. We've mentioned the battery capacity, but we'll like you to also know the Samsung Galaxy A31 features 15W fast charging and obviously comes with USB Type-C.

Going deep into the Camera features, the four rear camera MP is - 48-megapixel main camera, an 8-megapixel ultra-wide-angle shooter, a 5-megapixel macro camera, and a 5-megapixel depth sensor, while finally, the selfie camera is 20MP. It will interest you to know that this device features an on-screen fingerprint rather than a visible one at the back.

The price of both storage units is still yet to be known, but people suggest it will be a bit higher than the A30 and will likely be around $222 (N81,000).