Share
The latest Apple device iPhone 12 Pro is months away from its official launch but before then, there have been few leaks on what you should expect the iPhone 12 pro to feature this 2020. These rumors suggest the iOS device will likely come with 64MP Camera and 4,400mAh battery compared to 3969mAh battery seen in iPhone 11 Pro Max. How about the connectivity and sensors, let's see what to expect. 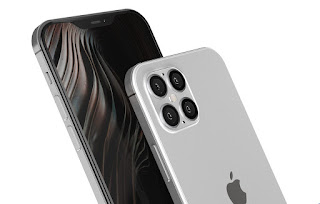 The iPhone 12 Pro has also been rumored to feature the next-generation A14 chipset, while the connectivity is 5G, though these are not confirmed by Apple, they are worth noting, knowing these are the leaked specs shared by Tipster "EverythingApplePro" which will likely be featured.

He said that Apple is considering upgrading the camera on iPhone 12 Pro which will match the new benchmarks set by brands such as Samsung Galaxy 20 series. The Camera design might not be different but likely be bigger and it will still feature a triple rear camera, but this time it will come with a primary 64-megapixel Sony sensor.


The YouTuber also claims the device will feature Night Mode and Apple will increase the aperture of the ultra-wide-angle camera by around 35 percent to f/1.6 with an added Time-of-Flight 3D sensor which will improve portraits and offer a better AR experience.

iPhone 12 series phones are expected to ship in three different screen sizes:
Before then, we are expecting the iPhone SE this month, but it probably will be delayed since the coronavirus outbreak is yet to be controlled and gatherings aren't an option.
PublisherWisdom UchePosted atTuesday, March 10, 2020 Post a Comment
Labels#Tech news