Share
Zoom recently add a new security feature on their Apps on every platform - Computer, Android, iOS and Web version. Since Zoom is being used worldwide as a means of communication, they decided to add an extra security layer to it's app. 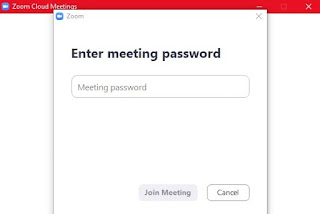 The reason for this new security feature was because a new report suggests that Zoom recorded videos may have been leaked online which reveals personal and private information, this also leaks to video call pranking and hacking, this is called 'Zoombombing'.

I first notice this new feature on Sunday when a password was needed to join a meeting ID, I thought it was an option on Zoom for a long time until I researched and found out it was added on April 5, possibly late Saturday.

Now Zoom requires both 'Meeting ID' and 'Password' to Join the Zoom meeting even if the meeting has been scheduled. So now if you have scheduled a meeting weeks or days back before this feature was introduced, you'll need to create another invitation again so you can add the password and send it to your invitees.

This new Zoom feature is very useful and it will make sure all your video conferencing and chats are safe and secure, no one but you and your participant can have access to it.
PublisherWisdom UchePosted atMonday, April 06, 2020 Post a Comment
Labels#Tech news, #Zoom