A month ago, we heard of the new WhatsApp feature that allows you to use one account on up to 4 devices. At this time, it has been reported to be in the final stages of testing before it is finally released. This feature will be released on Android, iOS, and Desktop as well. 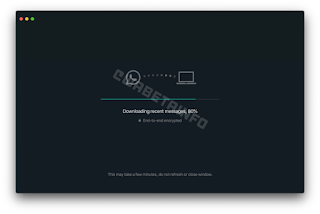 In addition to what you should be expecting, WhatsApp said they will update the user interface for the desktop client, this will improve its user-friendliness and have more customization features different from the mobile versions, also it was reported that the possibility to sync chat history like most social media does isn't ready yet.

These reports came from WABetaInfo, they confirmed that even though the linking to multiple devices is still in development stages, the feature to mute chats, sync chat history, star messages, and other features will be available for the beta testers soon. Below, you can see the image showing you the migrated chats to a PC and also the end-to-end encryption.

We can remember that on our previous post concerning this topic, in other for the multiple device support process to begin, you need a Wi-Fi connection, this makes it possible for the sharing of data from one device to another possible, and after this has been done, an internet connection will not be needed anymore. 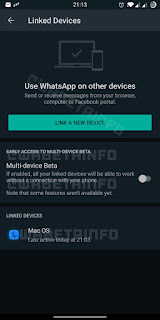 1. If you decide to enroll your WhatsApp account, any previous session will be immediately closed because the old mirroring technology was used and it’s not obviously compatible with the new one, and you will have to create new sessions. You should also report anything wrong to WhatsApp with feedback.

2. If you decide to unroll your WhatsApp account, the current session will be immediately terminated for the same reason previously explained.