Share
Call of Duty: Warzone may be coming to mobile phones even though we already have Call of Duty Mobile for Android and iOS. This is a very surprising news for the gaming community knowing there is an exclusive version for mobile that gets regular updates monthly with new skins, weapons and graphics improvements. As a CODm fan, here's what you should know. 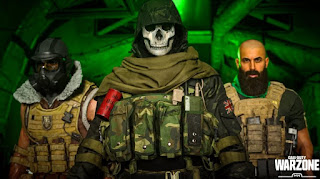 Activision's website added a job listing which has suggested that Warzone might be coming to mobile devices soon. The website had the position of the executive producer as "Executive Producer, Features (WZM)" in which the WZM stand for Warzone Mobile. Looking at the description, you can see the word "a new AAA mobile FPS" which is a total indication that Warzone for Mobile is coming.

In addition to indication Call of Duty Warzone for android and iOS will be coming to mobile, the job description had this to say "Harvest, adapt, and deliver the essential features from Warzone console and PC into their best mobile instantiation". It also added another sentence that said "Serve as a primary point of contact on Warzone Mobile leadership team…". These signs shows the game is currently under development.

To ease the attention of this update, Activision has pulled-down the job listing on their website as it's filled up, but this information was first spotted by first spotted by Charlie Intel that shares leaks, videos, images, and news of Call of Duty games on all platforms with over 1.7M followers on Twitter. Below, you can see the job listing screenshot before it was brought down.

So, Call of Duty: Warzone could really be coming to mobile devices in the near future. Activision has not said anything in respect to this after the job listing, we are yet to know the release date or the confirmed game title, but we should be expecting the game next year if development has already began, which is likely it has.

As PUBG faced ban in India, we all know the best alternative is Call of Duty Mobile that is accessible in many countries. It has battle royal mode, multiplayer mode, and the upcoming Zombie mode to be released late late October - November 2020. So with Warzone coming to mobile, this will bring a different experience, and might attract the attention of popular game streamers like DocDisRespect, Ninja, and the likes.
PublisherWisdom UchePosted atSaturday, September 19, 2020 Post a Comment
Labels#Call of Duty, #Games, #Tech news