Instagram Was Down, as Users Faces Crash Issues Across all Platforms

And then the server time out the issue for big social media platforms continues, Instagram was down just yesterday for most users on Android, PC & iOS devices. Users turned to Twitter to complain about outages using the hashtag #Instagramdown which was treading on Twitter for some hours. 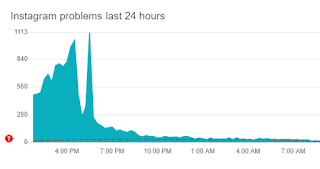 It seems the crash didn't affect all devices because some claimed theirs were still working fine, as others complain theirs' got crash issues, especially Android users. Instagram's official Twitter account is yet to say anything concerning what happened hours ago, rather they still post funny and cool videos on their profile.

SEE ALSO: Telegram was Down in Some Parts of the World

Instagram was down from 10AM - 8PM, since then, more users have been able to make use of the app without crash issue as seen on the DownDetector tracking website. Though Instagram sister websites - Facebook and WhatsApp didn't face this server downtime, they faced downtime earlier this month, it was noticeable mostly in Europe.

It wasn't clear what caused the outages, but as for Google, theirs was due to an issue with the company's automated quota management system, as confirmed by Google LLC. This made all Google services like Gmail, Blogger, YouTube e.t.c to be down.

Other companies including Instagram have not made it know to the public what the issue was on their platforms.