The Samsung Galaxy A52 and A72 smartphones are the upcoming Samsung devices that are expected to be released very soon, we have gotten leaked details of what you should be expecting on the device. Pieces of information concerning the battery, water-resistant design, camera, RAM, and ROM have been leaked, here is what you should be expecting from the Galaxy A52 and A72 phones. 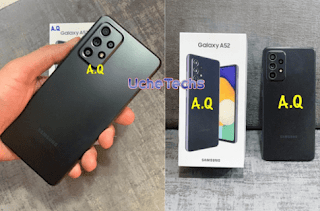 Galaxy A52 live images got leaked on Twitter by Tipster Ahmed Qwaider, the images were fully displayed and it still hasn't been taken down. The leaked images show that the device (A52) will be coming with IP67-certified dust and a water-resistant design. As for the A72, it is expected to come with stereo speakers, both devices are rumored to launch in India in March 2021.

Everything about Samsung Galaxy A72 pic.twitter.com/21qMv0stVB

Expected Specs of Samsung Galaxy A52

The Galaxy A52 will feature a hole-punch display design, it will also be coming with a quad camera design, in which the primary is 64-megapixel with optical image stabilization (OIS) as well as IP67 certification. With the device coming with Android 11, it is able to get support for Android updates till Android 13.

Expected Specs of Samsung Galaxy A72

Speaking of the Samsung Galaxy A72, it will be coming with a 6.7-inch full-HD+ Super AMOLED Infinity-O Display with a 90Hz refresh rate, it also is not powered by Samsung Exynos, rather it will be powered by Qualcomm Snapdragon 720G SoC. It will be capable of handling games due to its processor and its 6GB and 8GB RAM options, while the storage space is as large as 128GB to 256GB.

In terms of the Camera, it will come with a Quad design like the Galaxy A52, its main camera is 64MP, the battery features 22.5W fast charging.

So these are just some of the expected specifications due to the leaked information online. It could be less or more than what we have mentioned in the article, so stay updated for when these have been fully verified.