Share
Call of Duty: Back Ops Cold War is currently giving players an opportunity of a free trial for its Multiplayer and Zombies mode for eight days. This free trial will be available to all players across multiple platforms, though the single-player campaign mode will be unavailable during this period. 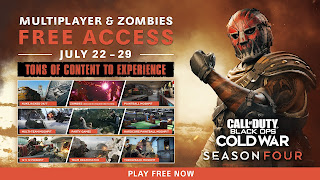 Activision also said the early access progress of players can also be carried to the main game when it is officially available, so you will not lose your progress. Call of Duty: Black Ops Cold War free trial mode began on July 22nd and it ends on July 29th, 2021 for all players on PlayStation 5, PlayStation 4, Xbox Series X, Xbox Series S, Xbox One, and PC.
While playing the multiplayer mode of the game, you will have full access to NukeJacked 24/7 (which features Nuketown '84 and Hijacked maps.), Party Games, Paintball Moshpit, and more.  Players will also have access to 12v12 Moshpit and 40-player multi-team Moshpit, and Team Deathmatch. In addition, it will also feature Rush, a 6v6 map that "takes place in and around a speedball course."
See Also: Call of Duty: Black Ops Cold War, Warzone Upcoming Season Four Details
The most popular model in the call of duty franchise and also in Black Ops Cold War is the Zombies mode, this model has recently added Mauer der Toten map alongside Die Maschine and Firebase Z maps.
PlayStation-exclusive mode is also available, you will be able to access the Onslaught mode that features "a two-person team fighting off zombies across Multiplayer maps." Also, by purchasing the game from July 21 to August 4, you will get the game at 50 percent discount, while Xbox players can get a discount when purchased from July 23 to August 5.
PublisherWisdom UchePosted atSaturday, July 24, 2021 Post a Comment
Labels#Call of Duty, #Tech news