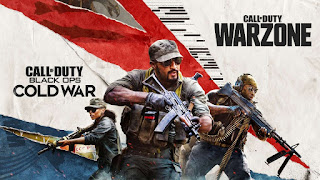 In Call of Duty: Black Ops Cold War Mauer Der Toten mode, players have the privilege to navigate the dark streets to reach various key landmarks while fighting off zombies in a round-based zombies map. Now players are able to carry three weapons on the Mule Kick, it also brings the LT53 Kazimir grenade that has a cool power to open up a black portal thatsucks in nearly zombies. Furthermore, you will get a new weapon called CRBR-S that is an upgradable energy-based pistol which when upgraded becomes a customized weapon.

PlayStation consoles players will get a new Onslaught map where they fight zombies and collect intel. The map includes an LMG weapon blueprint — Chemtaminate. Both the Call of Duty: Warzone and Black Ops Cold War will get two new weapons which are OTs 9 SMG and Mace melee weapon. A new operator class name Weaver will join the roster as part of the Tracer Pack: Weaver Operator Bundle.

Call of Duty: Warzone will come with a never-before-seen objective mode in the battle royale game know as the Payload game mode. This mode will have two teams of 20 players facing each other, trying to escort vehicles across several checkpoints to gather crucial intel. The enemy can purchase and build obstacles in other to slow them down.  So these are the major features coming to Call of Duty Warzone & Black Ops Cold War on July 15.