A Samsung Galaxy A21 smartphone reportedly caught fire recently on a flight of Alaska Airlines that was heading to Seattle. This serious incident caused the plane to be evacuated. 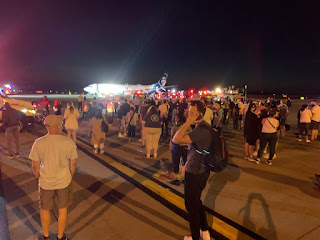 The Local report says the phone that caught fire was difficult to recognize, but the airport spokesperson reportedly confirms the device was a Galaxy A21. The cause of the explosion is yet to be known.

How did it happen? The fire broke out after the flight landed at Seattle-Tacoma International Airport, this incident forced the crew to deploy evacuation slides to get everyone off as quickly as possible.

The crew on Flight 751 was quick to make use of fire extinguishers and a battery containment bag that helped stop the device from heating and smoking.

This wasn't easy, the amount of smoke from the device reportedly forced the deployment of evacuation slides. Over 128 passengers and crew members were to be transported by bus to the terminal of the Seattle-Tacoma International Airport.

It was reported by the airport that there were some minor injuries and bruises, but there were no impacts to airport operations even though the Alaska Airlines aircraft was towed to a gate.

To clarify the confirmation of the smartphone that caused the fire incident, Cooper confirmed to the publication, "After much digging, I can tell you that the phone was burned beyond recognition. However, during an interview with one of our Port of Seattle Police officers, the passenger volunteered the phone was a Samsung Galaxy A21. Again, we could not confirm it by looking at the remains of the device."

Samsung device explosion did not happen for the first time, recall Samsung Galaxy Note 7 had several reports of explosions in different parts of the world. In addition, not long ago, an alleged Samsung phone kept inside a man's bag suddenly caught fire in China.