TRUTH Social is an official social media app launched by the Former US President, Donald J Trump. Trump said this new app of his would "stand up to Big Tech" companies e.g Twitter and Facebook that suspended him from their platform post the January 6th incident. 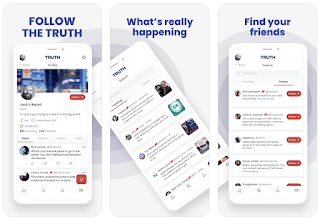 According to a press release distributed by (Trump Media and Technology Group) and a (special acquisition company) organizations, both organizations will be creating the TRUTH Social media platform.

“We live in a world where the Taliban has a huge presence on Twitter, yet your favourite American President has been silenced. This is unacceptable," Trump said in a written statement included in the release.

According to the news release, Trump's social platform, set to launch in a beta program next month, before a full rollout to the public, is the first of the three stages planned by the company. After this, there will be a subscription video-on-demand service called TMTG+, which contains extra features such as news, entertainment, and podcasts.

An upcoming feature to watch out for is what was in a slide deck on its website, the company has plans for the social service to compete against Amazon's AWS cloud service and Google Cloud. Possibly having hosting services such as offering access to Virtual Private Services and Dedicated servers.

"For so long, Big Tech has suppressed conservative voices," the former president's son, Donald Trump Jr., told Fox News in an interview. "Tonight my father signed a definitive merger agreement to form what will ultimately be the Trump Media and Technology Group and TRUTH Social - a platform for everyone to express their feelings."

Since the ban on Trump's social media accounts such as Twitter, Facebook, e.t.c, there have been several speculations regarding Trump's next plan. There were expectations of him joining Gab, Telegram, or even his former advisor's app that got launched. However, Trump launched a site to upload his statements, which was later taken down after some backlash by new media. Now there is finally an official social media app the Former US President has announced.