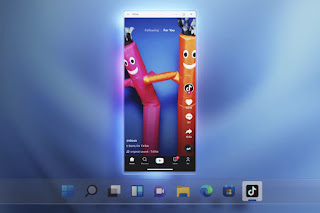 The Android apps and games experience on Windows 11 will be very smooth, you will be able to run the apps side-by-side using the new Snap Layouts feature or pin any of them to the Start menu. Furthermore, you can switch between running apps as you do on the regular Windows programs by making use of the Alt + Tav function or Task view.

See Also: Windows 11 Now Available for Download: How to Get

In the meantime, Microsoft has added 50 supported Android apps for Windows 11 beta testers who are part of the Windows Insider programme. Some mobile games include Lords Mobile, June's Journey, and Coin Master, as well as apps such as Kindle, Khan Academy Kids, and Lego Duplo World.

However, knowing there are over 3 million apps on Google Playstore, and 460,000 Android apps on the Amazon Appstore makes the Windows Android app support possible, so the 50 Android apps on Windows 11 for beta users might just be quite small.

Microsoft claims that running Android apps and games on the latest Windows operating system will be as fluent as running a native app. This could mean users can easily interact with Android apps using a mouse, screen touch, touchpad, or pen input and run them with interactive features like pinning apps to the Start menu or Taskbar.

By using the Win + A (Action Centre), you will be able to see notifications from the Android apps installed on your Windows 11 PC together with the regular Windows notifications. Similarly, you can copy and paste clipboard from Android to Windows or vice-versa.

In conclusion, to get the limited Android apps to support while on the Beta Programme, make sure that your Windows 11 PC is set to the US region. Furthermore, the Amazon account you are using should also be US-based to download Android apps via the Amazon Appstore.